Warning: count(): Parameter must be an array or an object that implements Countable in /home/customer/www/delmar.bennettbaypress.com/public_html/wp-content/plugins/social-autho-bio/social_author_bio.php on line 68
 The Live Oak Tales – Stephen del Mar
Skip to content

The Live Oak Tales are a collection of tongue-in-cheek paranormal stories that include characters and settings from the larger collection of Bennett Bay Stories. Although they deal with some serious issues such as love, loss of loved ones, the Holocaust, and trafficking, they aren’t meant to be taken too seriously. I poke a bit of fun at the traditional paranormal tropes. Enjoy! 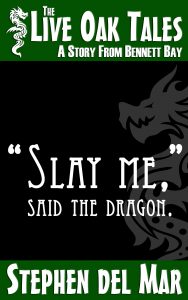 “Slay me,” said the dragon. (Prequel to The Live Oak Tales)

Drake’s a pretty, blond twink of a college kid and he has a problem. It’s his twenty-first birthday and the one person he wants at his birthday bash isn’t there. Flint, his roommate, is missing. Drake decides to ditch his own party and find him. This is the night he’s going to tell Flint how he really feels, but where is he?

Flint’s hiding out in a leather bar that’s secretly a dragon den. Things get interesting when Drake finds him, because Drake has a secret of his own, he’s really a dragon slayer. “Slay me,” said the dragon is a wacky short story about star-crossed lovers and unintended consequences. 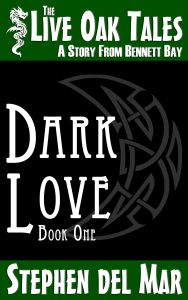 Dark Love (Book One of The Live Oak Tales)

Love and family, the two things Dieter Reinhold wants most are slipping away. His Uncle Wolfgang, the man who raised him as a father, is dead. Now his brother can’t wait to bulldoze and sell the family farm. Yet Dieter clutches at the memories of the past, fighting to hold them close. What Dieter doesn’t know is the past can be present and what is dead doesn’t always stay dead. He discovers that love is never dark. It wants to live in the light.

Dark Love is a paranormal romance set in Stephen del Mar’s Bennett Bay region of Florida. There are witches, faeries, bears, twinks, a dragon drive by, and one very determined fag hag. Once again del Mar gives us the rich texture of his Florida setting that goes from the bayside tourist town of Bennett Bay to the backwater country hamlet of Live Oak. Remember, things are not always what they seem and be careful what you do under the light of the full moon! Click to read sample. 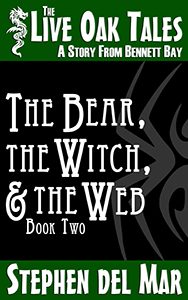 The Bear, the Witch & the Web (Book Two of The Live Oak Tales)

A month has passed since the events in Dark Love and Max is preparing to deal with the passing of Flora May. What he isn’t prepared for is entering the world of faeries and dragons. The Jumble, the ancient wood just beyond the family farm, is in crisis. The fae are missing and the Witch of the Wood is dead. Can the Circle move past their grief and defeat the menace in the depths of the Pit? Will the secret of the Water Stone be revealed? And most importantly, will there be tea? Read sample here. 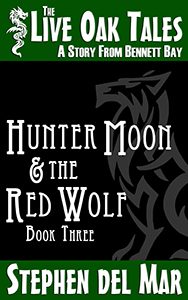 Wolves! Wolves have returned to Florida, or at least in eastern Big Cypress County, and no one knows why or how. Janos Pac, the new Witch of the Wood, is desperately trying to hold Flora May’s old Circle together, but things are falling apart despite his best efforts. Stone, the youngest member of the group, is the only one to show up for Samhain. After his first cup of tea, the blue kind, things take an unexpected turn. A plot by the dragons is unearthed and everyone’s on the watch for owls. Beware the owls! Read sample here.