Warning: count(): Parameter must be an array or an object that implements Countable in /home/customer/www/delmar.bennettbaypress.com/public_html/wp-content/plugins/social-autho-bio/social_author_bio.php on line 68
 The Demise of Bobby & Clyde: FREE Short Story – Stephen del Mar
Skip to content 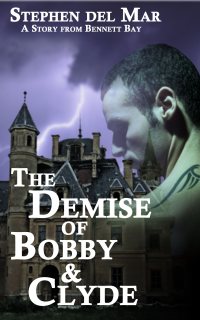 Free on Amazon for the next 5 Days!

Clyde really loved Bobby. He wanted to give his man the world. He thought robbing a bank would be the way to do it. That was his first mistake. The Demise of Bobby and Clyde is a short ghost story set in the boondocks of Big Cypress County, Florida. A classic haunted house tale with a couple of gay bad boys. Warning: It doesn’t end well for the guys, but there is a lot of ever after.

A terrific little spooky and dark ghost story – a perfect lazy, rainy day afternoon read! del Mar provides just enough of a mystery and thrill to pull reel this reader in and not let go until the end. Reading this short is like dropping in on the harried lives of two young men on the run after robbing a bank and following their path of discovery to an abandoned, century old mansion in the swamp. A great ghost story that hints at further adventures. Very Hitchcockian! —Jon Michaelsen