Warning: count(): Parameter must be an array or an object that implements Countable in /home/customer/www/delmar.bennettbaypress.com/public_html/wp-content/plugins/social-autho-bio/social_author_bio.php on line 68
 Selected Scene: Ethan, Tony & Victor in the Park – Stephen del Mar
Skip to content 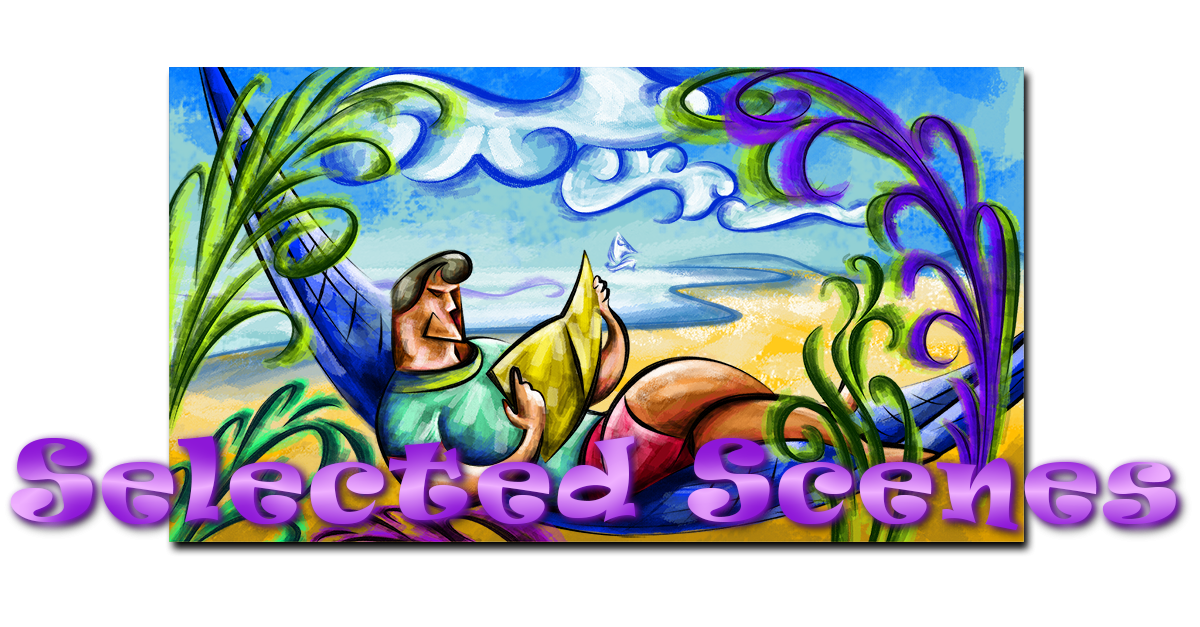 “So you like mint chip ice cream?” Tony asked.

Victor smiled as he licked his waffle cone. “Not particularly. I ate it a lot when I was a kid. It just caught my eye. How’s the butter pecan?”

“Oh, so creamy. The guy at the cart said they have a storefront in town, right? If they’re open we’ll have to pick up a few pints to take back to the house.”

Someone in the crowd bumped Tony and he nearly dropped his cone. “Damn. It’s packed here.”

“Let’s head for the lake, we’re right in the path for the music venue or do you want to go see the concert?”

Tony followed Victor as he worked his way through the throng heading for the music stage. “It’s all bluegrass music this weekend, isn’t it?”

Victor licked a drip on his cone and nodded. “Yes, Chance is playing tonight, some kind of bluegrass-fusion band from Fort Myers. They’re supposed to be popular with the younger set. Sean’s always going on about them.”

Tony dodged a group of teens walking along with their eyes glued to their phones. “That explains the herd of kids.”

Victor pointed with his ice cream cone at a lone teenager leaning against the lakeside promenade railing. “Speaking of Sean, isn’t that Ethan, his boyfriend?”

Tony swallowed a bite of ice cream. “Looks like it. Should we say, hi?”

He leaned against the railing next to Ethan. “So there’s all kinds of action going on and you turn your back on it and look out at an empty lake shrouded in the night.”

Ethan startled then smiled when he recognized the men. “Mr. Cruz and Gallo.”

“Oh come on,” Victor said. “Call me Victor. I live in the same building as Sean. You call Marcus and Max by their first names.”

He looked sheepish. “Well, I know them better. Sorry.”

“It’s okay. And I’m Tony. I’m not around that much and this one is off globetrotting most of the time.”

Ethan looked between them. “So you come all the way out here… together?”

Tony leaned his back against the railing and licked his cone watching the crowd. Victor didn’t say anything, so he said, “We’re staying at a bed and breakfast outside of town with my sister and her family.”

“A family thing? That sounds kind of together. I didn’t know.”

Tony looked past him at Ethan. “The kind with benefits.”

Ethan grinned. “I think they went over those in Gay Studies Class.”

Tony snorted and finished off his cone.

“So,” Victor asked. “Why are you alone and looking into nothingness?”

Ethan turned back to the lake and pointed. “It’s not nothing. See that blue light out there on Jackson Island? That’s the dock for camp. Sean and I are working there this summer.”

“Where is he?” Victor asked. “Not used to seeing one of you without the other.”

Ethan frowned and looked back out at the lake. “He’s spending the next week down in Tampa with his dad, but they may come up Sunday night. There’s a big family thing at his Aunt and Uncle’s house.”

Victor nodded. “I think Aidan said something about that. They were taking the boys on the houseboat right?”

Tony asked, “So will you see him?”

Ethan shrugged. “He’s supposed to meet-up with us for the bar-b-cue on Monday.” He looked back. “Our friends Sally, Jess and Blake are coming out for the day. Don’t know about Boz and Cob. Something’s up with them.”

Tony didn’t like the defeated tone in his voice. Ethan was a quiet kid but he usually bubbled with enthusiasm when he talked about Sean. He was about to ask about things between the boys, when his nephew called from behind them, “Uncle Tony!”

“Yeah. I ditched the kid with Mom and Dad. Some friends from school are going to the concert. Dad said I could go, but they’re late.” He pulled his phone out. “They still can’t find parking.”

Victor pulled the festival’s program booklet out of his back pocket. “There’s a big field on the south side of town. Tell them to take Magnolia Street out of town. They have shuttles to the park.”

“Thanks.” His thumbs tapped away at his phone and then he slipped it back in his pocket. He looked between the men and Ethan, and then extended his hand. “I’m John.”

“God, I’m sorry,” Tony said. “This is Ethan. His boyfriend lives in Victor’s building. This is Johnny my nephew.”

“Right,” Tony said with a smile. “I’ll try and remember that.

“Hi,” Ethan said as he shook his hand.

“So aren’t you going to the concert?” Victor asked Ethan. “I thought you guys liked Chance. Sean played me several of their songs.”

He nodded. “Yeah, he really likes them and wanted to come up tonight, but his dad didn’t want to come back till Sunday.”

John’s phone rang. “My crew. Just a sec.” He pulled his phone out and stepped away.”

“So, I take it you’re here with your family?” Victor asked.

Ethan nodded. “Mom and Dad wanted to getaway before summer term starts… they’re both professors, did you know that?”

“Anyway, I had a week before camp starts, so they thought it’d be fun to come out here for family time. My sister just graduated and she’s heading back to Minnesota this summer for college—wants to spend time with her old friends before school starts.”

Tony asked,“So are you having fun?”

He shrugged. “Just the first night. I don’t know. Max got us tickets for the steamboat race tomorrow. We’re on the Dragon Fire with him. That should be fun.”

“We should’ve done that,” Tony said.

Victor said, “Well, we hadn’t planned on being here this weekend. It was all last minute stuff. Should we call Max and see if he could get us aboard?”

Tony shook his head. “Let’s not impose. And it’s not just us. Aren’t they doing rides all weekend?”

John came back and Victor asked him about riverboat rides. Tony leaned closer to Ethan. “So you got a bad case of missing-your-man-blues?”

“Maybe. Does that make me clingy or needy? Just we’ve never been apart this long and he’s still new at this.”

“I’m his first boyfriend. He just came out, you know.”

“Something I haven’t thought about in years. It’s hard to have a relationship with someone that isn’t at the same level of outness as you are.”

“Yes, but we have things we have to work through—get out of our system.”

“That’s one of them. That coming up?”

“Are you willing to ride it out with him?”

“There you are,” Katie called as she walked toward them. John stopped in mid-sentence and turned from Victor to watch her. “Mom and Dad are heading back to the Inn. Are you going to the concert?”

Victor bit his lip so he wouldn’t laugh. Tony coughed.

Katie turned and gave John a quick up and down, then turned back to her brother, with a who-are-these-people-look on her face. “I don’t want to go alone,” she said.

“My friends are coming. You could go with us.” He held out his hand. “I’m John, Tony’s nephew.”

She rolled her eyes and turned back to him. “And that might mean something, if I knew who Tony was.”

She looked back at her brother. “Another one of your gay friends?”

“Wow. Bitch much?” Ethan said. “This is Victor and Tony. Friends of Sean’s uncle. Victor lives in the building too.”

She gave the men a perfunctory nod and smile. “Seems, everyone does. Look are you coming? Jess and Sally are here with their cousin. They’re all staying at their grandparents house in Cooter Crossing this weekend.”

“Fine,” she said. “Go back and sit in the room by yourself.” She turned, pulled out her phone and stalked away.

“Yeah,” Ethan said. He turned to John. “Sorry about that. My dear sister was the alpha mean girl at Bayside. Wasn’t a fun shadow to live in.”

John let out a long sigh. “I bet. You can hang with us if you want.” He gave him a wink. “I think you’ll like my friends Josh and Tom.”

A sheepish grin spread across his face. “You think so?”

“Okay.” Ethan smiled. “Better than sitting in a room and I can send Sean pics and make him all jealous.”

John started leaning him away. “Jealous of seeing Chance or the guys?”

John grinned. “Wait till you see Josh. Hell, if he asked, I think I’d do it with him and I’m so totally not gay.”

John called back over his shoulder, “See you for the fireworks. We’re supposed to meet-up at the old guard tower.”

Victor slid next to him. “Wow. That was a bit of drama.”

“I know. And Ethan’s like the sweetest thing ever.”

“So Johnny handled himself well.”

“He’s really grown up this year. I think he’s going to be a good man. I’m proud of the way he stepped up and included Ethan. After what she did, he certainly didn’t have to do that.”

“Yes he is. But I was thinking of you and Lance as well.”

Tony caught his breath. He whispered, “He loved those boys so much and they adored him.” He wiped his eyes. “Damn. I’m sorry.”

Victor moved in and wrapped his arms around him. “No sorries. Not about Lance. Okay?”

Tony pulled him tight. “You’re such a good friend.”

“And I come with so many benefits.”

“So how soundproof do you think the walls are in that old house?”

Victor snickered, “I think we’ll find out by the family’s demeanor over breakfast tomorrow.”

Tony eased the embrace and stepped back. “Aha, eggs with a side of awkward.”

“Maybe Helen and Jack will be louder than us.”

“You just might have to take me out to woodshed and spank me.”

Tony took a step back and raised his eyebrows. “Really?”

“Well, everything doesn’t have to be vanilla does it? And it’s an old farm, there’s got to be places to do it away from everyone else? We can check out the springs at the head of the creek. Some skinny-dipping and screwing on the sandy bank.”

“You’ve given this some thought.”

Victor smiled and moved in for a kiss. “I’m a small business owner. I take benefit management very seriously.”

Tony moved his lips closer. “This is going to be one hell of a weekend isn’t it?”

Victor didn’t say anything. His mother taught him not to talk with a full mouth.