Warning: count(): Parameter must be an array or an object that implements Countable in /home/customer/www/delmar.bennettbaypress.com/public_html/wp-content/plugins/social-autho-bio/social_author_bio.php on line 68
 Selected Scenes: Lydia & Ethan by the lake – Stephen del Mar
Skip to content 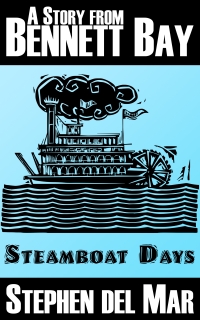 Ethan held his hand to block the light from the setting sun. His mother held a plastic boat with banana, ice cream, whipped cream and toppings out to him. He shrugged.

She sat down on the bench next to him. “Oh Dear, what is it? You perked up there during dinner with Marcus and Max, but now you’re moping again. Is it so bad spending time with us?”

He took the boat from her and used the spoon sticking out to scoop up some of the whipped cream and toppings. She reached out and tucked a bit of hair behind his ear. He pulled his head away. It was embarrassing for his mother to touch him like that. He was seventeen now. Then he frowned and stabbed the spoon back in the ice cream. It was also comforting. Something Sean would do when they’d lie together after sex. “It’s not you guys,” he said and took a mouthful of banana and ice cream.

She reluctantly pulled her hand away and looked out over the lake. Very gently, she said, “I know I’m not one of your gay friends, but I can still listen. I’m still your mother.”

She nodded, but he wasn’t looking at her. He kept looking down at the banana split, stabbing it with the spoon.

He looked up at her. The moisture in his eyes caught the sunset. She wanted to reach out, touch his face, and wipe away the tears like she did when he was a child. She clinched her fist. “Ethan…”

He shrugged, looked back down, and took another bite of the banana split. “First loves, can’t last. Otherwise, they wouldn’t be first loves, right?”

“But you’ve had other boyfriends.”

“What brought this on?” She looked out over the lake to the large island in the distance. “I thought you two were looking forward to spending the summer together at camp?”

He stabbed the ice cream again. “Well, it’s not like we can really be together. It’s a liberal camp, but they aren’t going to let us share a bunk. And then there’s Parker.”

“Sal and Jess’s cousin. He just graduated from some military academy up north. Apparently, he’s already hit on Sean. He’s going to be at camp too.”

She reached out and took his hand. “Oh Dear, Sean loves you. I’ve seen the way he looks at you.”

Ethan frowned. “See you don’t get it. This really isn’t about love. He’s just coming out. He’s gotta get the sex out of his system. We go through this slut stage. Parker’s hot. Sal sent me a photo.”

“Slut stage? Don’t you think that’s a bit of an exaggeration or over generalization? You didn’t do that… did you?”

He smirked and raised an eyebrow. “Well I came out at thirteen, but didn’t you wonder why I was so gung-ho about going on all of those Boy Scout camping trips?”

She blushed. “On the camp outs?”

“But what? He hasn’t had a chance to do that. I can’t keep him from that. I don’t think I should. I’m just not ready to share him. Maybe I’m too needy.”

He shrugged again. “I think it’s a guy thing, or at least, a gay guy thing. Sex isn’t about romance most of the time. It’s more like sport. I’m still trying to figure it out.”

“You talking about open relationships?”

“Kind of, I guess. They call it poly now. From what I’ve been reading, most gay men have some kind of open relationship.”

“Are you sure? Don’t believe everything you read online.”

“Yeah, I know. But I don’t have a lot of male-couple role models, do I? There’s Aidan and JJ, Stan and Zach, and Marcus and Max.”

“Do they have open relationships?”

“Don’t know.” He chuckled, “Well I think JJ would shoot anyone that tried to hit on Aidan. I don’t really know Stan and Zach that well. It’s all rather personal isn’t? I want to talk to Marcus about it.”

He blushed. “Sorry. But you want to talk? This is what it’s about. You get I’m having sex now, right? What, Katie doesn’t talk about the boys she’s blowing when you have your mother-daughter days?”

Lydia’s face burned. She looked at her husband and daughter wading along the lakeshore eating ice cream cones. “No… how many?”

Ethan snorted. “Well don’t have a spreadsheet or anything, but definitely more than me, especially since I met Sean. She didn’t want to get into anything serious this year. Didn’t want anything to keep her from going back to Duluth for college.”

“She never liked it here did she?”

“She had a lot of close friends up there.”

Lydia looked back at him. “You had friends.”

“Well I was younger. And I was lost in my art. She was already in high school when we moved.”

She sighed. “Your ice cream’s melting.”

“So have you talked to Sean about any of this?” she asked. “Just because you’re boys doesn’t mean you don’t need to talk.”

He shrugged. “Haven’t really had time. Not sure how. Nothing drives a guy away faster than someone’s who’s needy and clingy. I know.”

“When that’d happen to you?”

“Last year. Didn’t you wonder why Tim and I broke up?”

“Wasn’t sure I should ask. It did surprise me. What happened?”

“He asked me to be exclusive… you know, go steady.”

He stabbed at his ice cream again. “Yeah. Made me run right away. Felt like I was trapped or something.” He stood up and tossed the boat into the trashcan next to the bench. “I’m a chicken shit.”

“Ethan.” She reached out for him but he stepped back and turned around, facing the lake. “So are we going to watching the fireworks here or go down to the park?”

She stood up and started to reach out for him again, but let her arm drop to her side. “I don’t know. Let’s go ask your father and sister.”

He nodded and headed for the lakeshore.