Warning: count(): Parameter must be an array or an object that implements Countable in /home/customer/www/delmar.bennettbaypress.com/public_html/wp-content/plugins/social-autho-bio/social_author_bio.php on line 68
 Hop Against Homophobia and Transphobia – Stephen del Mar
Skip to content 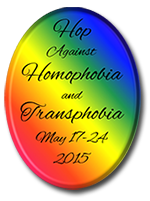 This post is for the Hop Against Homophobia & Transphobia blog hop. A part of International Day Against Homophobia, Transphobia and Biphobia (May 17th). Part of the hop is a giveaway. I’ll pick a random person from the comments below to win a free copy (Kindle version) of one of my books–winner’s choice. Then again, everyone who signs up for my newsletter get a free book too. 🙂

So I have this essay to write and I can’t sort out my thoughts. I keep flashing back to college and grad school and trying to pin down a thesis statement. But, I’m all over the place. And being a pantster isn’t helping!

First, I have a problem with the word homophobia, which implies a fear of homosexuals. That isn’t our problem. The problem, as I see it, is a systems thing. I really don’t care if someone doesn’t like me or is afraid of me because I’m gay. Individuals don’t have that much power over me and there are many reason for someone not to like me. The things that impact me are the institutions in our culture. Is it legal for someone to deny me housing or medical care? Can my employment be terminated? Can children be taken from homosexual parents? Can homosexual adults be denied the opportunity to adopt children simply because of their sexuality and so forth? This is all a matter of heterosexism and the heteronormativity assumptions embedded in our culture. Of course heterosexism intersects nicely with ridged dualistic gender norms that lock humans into an unrealistic binary of feminine and masculine.

So this brings me to my first point:

The right of individual self-determination and happiness.

You know the whole life, liberty, and the pursuit of happiness thing. Funny how we’re still working on that one. This isn’t an uniquely American thing, but it is, or should be, an intrinsic one. And yet, as I write this, a number of States are trying to pass so called “Religious Freedom” laws in backlash to the progress of marriage equity. I find it fascinating that so many folk get their knickers in a knot over others wanting the basic right to be themselves. The basic right to be happy.

It is also interesting to see how others are using the ignorance and bigotry of some to push their agenda. A slight of hand, or a bit of bread and circus to keep the folk distracted so they don’t notice their rights being taken away. Not that I’m slipping into paranoid conspiracies or anything. Just my next point:

We need to be aware that as minorities in a culture get more power there is an institutional push back to the change. A lot of this is due to the loss of the privilege high-status groups enjoy. As things change, assumptions about social roles and norms are questioned and an uncomfortable spotlight can be shined on social privilege.

Personally and professionally, I’ve done a lot of work around the privilege I have as a white male. Unpacking that “knapsack” isn’t pretty and often painful. Most people go through life with a lot of assumptions and don’t like those assumptions challenged. Because they then have to do some deep thinking about themselves. The more they’ve bought in to the social “rules” of the correct gender manifestation, the correct way to love and form relationships and so many other things the harder it becomes to admit that there just might not be a “right way” to be or a “wrong way.” (For example, many heterosexuals never thinking about when they chose to be heterosexual, even though some think homosexuals or bisexuals do this.)

I think we need to take the Backlash phenomenon seriously. The LGBT community is a true minority community. In that a small percent of humans are homosexual or experience a disconnect from their perceived gender and how they really feel. (I’d concede that the human animal is probably largely bisexual, but in modern times the heterosexist-heteronormativity thing just skews the hell out of sexual expression.) Until things radically change, we are vulnerable. I’ve always found pre-WWII Berlin an excellent cautionary tale.

Out and proud gay and lesbian life reached an unprecedented richness and freedom in pre-war Berlin. Homosexuals became one of the scapegoats and targets for German Nationalism and everything went away. It was nearly a century before our people gained that level of freedom again. We will always be the minority, our rights and safety will always be at the pleasure of the majority. Laws will only protect us when they are enforced. We have laws baring discrimination based on race in this country but only a fool would believe racism has ended.

So what do we do?

This means that as a white gay male, I need to be aware of the struggles for others. I need to confront sexism, racism and other issues of social justice too. Identity and identity politics are important but if we stop there, it becomes divisive. Just as we need to integrate all of our individual characteristics to be a whole person, I think we need a holistic approach to our communities and our activism. The whole community needs to be included and engaged.

How do we make that happen?

We, being writers involved in this blog hop and looking at how our writing can be an agent of change. I think we tell stories that matter. I think we have characters that are multi-dimensional. Characters that are more than pretty young well hung white boys out for a screw or HEA endings. We struggle with race, gender expression and identity. We face not just homophobia, but the underlying heterosexism in our society. We shine the light on heterosexual, cisgender, racial, and economic privilege. We take the chance that for just a moment we make our readers think. We push them just a bit. I know that’s a risk. We don’t want to turn them off or away because we all want to make a buck. I really want to make a buck. But isn’t that the right thing to do? And isn’t the right thing to do always a little risky?

Check out the other blogs in this hop!