Warning: count(): Parameter must be an array or an object that implements Countable in /home/customer/www/delmar.bennettbaypress.com/public_html/wp-content/plugins/social-autho-bio/social_author_bio.php on line 68
 Free: “HIM,” a short psychosexual horror story. – Stephen del Mar
Skip to content

HIM is free for the next five days on Amazon. 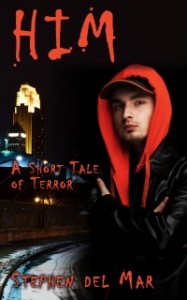 This story is really different from what I usually write. I wandered what it would be like to go to a dark place for a story. I found out. I think it’s a good story, but I don’t see myself writing in this genre too often.

It was fun setting the story in Minneapolis where I used to live. I used to commute on the bus and, as in any lager city, there are a number of mentally ill folk on the bus. I said “hi” to one guy and for the next few days I could tell he was including me in his delusions. I stopped taking that bus for a while. That stayed with me. I wanted to play with the idea of what happens when delusion and obsession go unchecked.

Grab a free copy and let me know what you think. 🙂

On a personal note and update

Folks that follow me on Facebook know I just moved. Which just is one way of saying, “OMG, who the hell has time to write!” Fortunately the computer is back up so I can get back to the paid work and the writing. I swear I will finish Cooter Crossing by the end of summer! I have to because people are demanding the follow up to Dark Love, which is cool and all. I really need to learn how to write faster! It looks like given the choice between unpacking and writing, writing is winning out. This is a good thing. 🙂

You’all have a good weekend.