Warning: count(): Parameter must be an array or an object that implements Countable in /home/bennet60/public_html/delmar/wp-content/plugins/social-autho-bio/social_author_bio.php on line 68 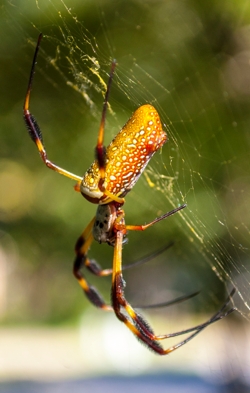 So how do you like the spider? It’s a Banana Spider or Golden Orb Spider and they’re pretty common here in Florida. They especially like to build their webs across trails to catch the bugs flitting around in the open space. The problem is they tend to build the webs right at face level and if you aren’t looking where you’re going… face full of web and a rather large spider. Fortunately, they aren’t dangerous to humans—normally.

I’ve included a photo of this lovely lady for two reasons. First, I’ve been so damn busy finishing up the first draft for Return to Cooter Crossing cobwebs are growing on this blog and, secondly, because one of these spiders plays a major role in the follow up to Dark Love, which I just started.

So the ending in the title of this post refers to finishing the draft of CC. It’s waiting on a first read through by my editor to see what needs to be chopped or fleshed out. Then I’ll get it all gussied up for my beta readers.

The beginning is the start I’ve gotten on The Bear, The Witch and the Web, which is the working title for the sequel to Dark Love. I’ve been on a week long vacation pretty much doing nothing but writing. The rain everyday here in Palm Bay, Florida has made it easy to focus on writing. And the sangria helps too. I make really good sangria it turns out.

Okay, the final bit of catch-up news (hehe) is I got another five star review for Dark Love on Amazon. Happy dance on that one!

By far the BEST of the Bennett Bay stories!, September 27, 2014
This review is from: Dark Love (A Story from Bennett Bay) (Kindle Edition)

A interesting blend of the supernatural and the everyday. I found this author’s take on lore surrounding his mystical characters unique. Still he blends them seamlessly with the mundane, familiar reality of the common townsfolk. I was moved by the all the emotion in the story. I truly felt empathy for the characters. I found it a very engaging read, and one I recommend.

Click here to read the link on the Zon.

Okay folks, I only have one more day of vacation left, so I need to get back to writing!